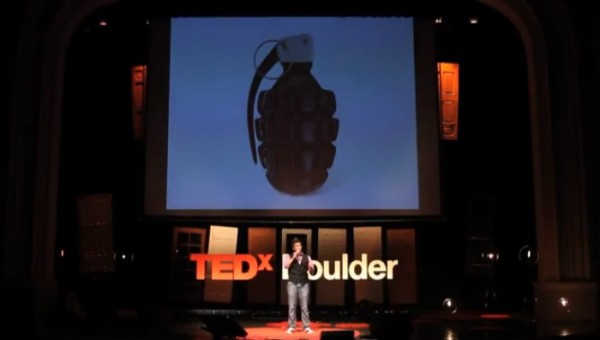 In an honest, inspiring talk, Ash Beckham shares her own story of coming out and explains how we can all learn empathy from our own secrets.

Secrets, secrets are no fun.

Do you guys remember this rhyme from your childhood? As an adult I’ve found this to be all too true, and the one that secrets tend to hurt most is the secret-keeper. In this beautiful talk from TEDxBoulder, Ash Beckham tells her story of coming out of the closet and asks us to examine what feelings we are hiding away.

She also asks us to wonder what closets other people are living in, because don’t we all have secrets that we’re keeping? When someone is rude to you or impatient or even just plain mean, Beckham asks you to not react. Instead, she asks you to give that person some credit. Maybe they’re going through something that we have no inkling about.

I can tell you from experience that Ash Beckham is onto something. As a freelance writer and editor, I have dozens of coworkers living all over the world. Sometimes those coworkers flake out on me. Sometimes they miss deadlines or turn in subpar work. This doesn’t happen a lot. When it does happen, though, it almost always turns out that there’s something going on. Maybe someone in their family is sick or they’re having relationship troubles. Whatever is happening, that hard conversation is so worth it.

Understanding what’s motivating my coworkers helps turn those situations around, in a way. Instead of being annoyed about someone missing a deadline, I’ve learned to see that as a chance to support another human being who’s going through a rough patch. Our personal and working relationships end up stronger for it.

There is no harder, there’s just hard.

This quote is so powerful. When you’re going through tough times, it doesn’t help anyone to say it’s harder or less hard than someone else’s tough times. We need to understand and support each other. I think this is such an important key to happiness, and Ash Beckham totally nails it with the quote above.

What did you guys think about the talk from Ash Beckham? I’d love to hear your take in the comments!