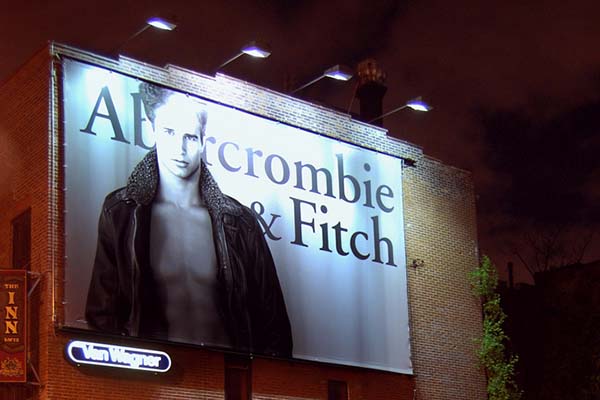 …and they don’t make clothes for plus sized women, either.

Furious? So am I!

As if making their clothing in sweatshops wasn’t enough, Abercrombie CEO Mike Jeffries publicly stated that the company doesn’t want plus sized women shopping in his stores. After reading some of his remarks, I don’t think any women should shop there.

Elite Daily highlighted an article about Jeffries on Business Insider, where they reveal that his company doesn’t produce sizes XL or XXL or pant sizes above a 10, because he doesn’t want “fat chicks” shopping in his stores. He says he wants “the cool kids” at his store, and this is also the reason that they only hire good-looking people.  In Jeffries’s mind, you can’t be cool unless you are thin and conventionally attractive. Here’s a quote from a 2006 interview that I think sums up how gross this guy is:

What’s really interesting is that Abercrombie’s website has a whole page about how they embrace diversity. How do they square that message with their choice to discriminate based on size and physical appearance both in their production and hiring practices?

As someone who has struggled with body image issues in the past, I know how remarks like the ones Jeffries made can sting, even if you’re not plus size. Those comments are mean, and they’re also so damaging for young girls who are just figuring out what makes them valuable. I hate that companies like Abercrombie make women feel like we aren’t worth anything if we’re not a size 6.

As consumers, though, we have the power to send a strong message to Mike Jeffries by hitting his company where it hurts: the wallet.

The best way to tell Abercrombie to quit the fat-shaming is by refusing to spend your money there.

Luckily, there are lots of clothing companies out there that embrace women of all shapes and sizes. H&M has a plus line that includes XL, XXL, and pants sizes up to a 24. And unlike Abercrombie, H&M is making some big progress on the sustainable fashion front.

You can also skip the new clothes all together! Big box clothing has more problems than how these companies’ marketing tactics affect young women. There’s a cycle of waste associated with fast fashion, and for an ethical fashionista, buying heirloom pieces or shopping vintage are much better options.

What do you think about Jeffries’s remarks? Did you shop at Abercrombie & Fitch before? Would you continue to shop there after learning about these company policies?